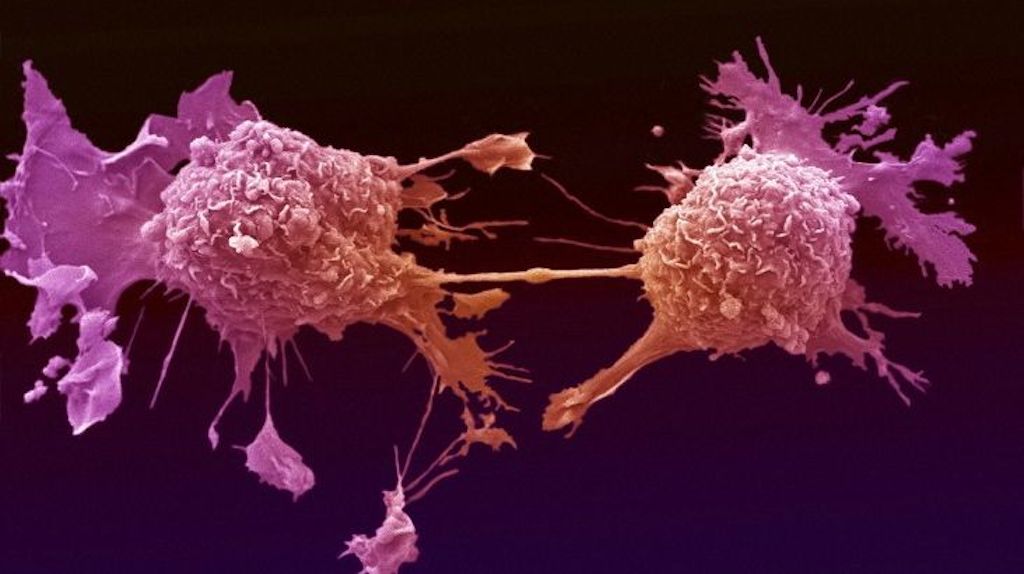 Researchers in Spain have taken a key step in unraveling one of nature’s most malignant mysteries: How do cancerous tumor cells that establish a beachhead in one organ strike out in search of new territory to colonize?

Some answers to those questions came Wednesday in a study published in the journal Nature. In a series of experiments using human oral cancer cells implanted in mice, scientists at Barcelona’s Institute for Research in Biomedicine focused on a single protein that sits on the surface of some cancer cells.

Known only as CD36, this protein helps usher a key energy source — fatty acids — into the cell for use as fuel.

The presence of CD36 on a cell’s surface was revealing. Amid millions of cells that make up a tumor, only a very small number are equipped with this telltale fatty acid receptor.

Within groups of oral cancer cells transferred from humans to mice, these were among the first to break free of their beachhead in search of new territory, the scientists found.

They functioned as cancer’s expeditionary forces, plying the body’s bloodstream or lymphatic tissue to find new sites to conquer. And they were not limited to oral cancers:  The same fat-metabolizing proteins appear to play a key role in spurring metastasis in ovarian, bladder and lung cancers, and possibly others.

The researchers, led by stem cell biologist Salvador Aznar Benitah, used this finding to develop two experimental antibody treatments capable of disarming CD36. Ideally, these armies of cloned immune cells would knock out CD36 and deny the expansionist cancer cells the means, or perhaps just the impetus, to wander beyond their place of origin.

It worked. Among the mice implanted with human cancer cells, those that got an infusion of cloned antibodies every three days showed no metastases, even though the cancer cells had established themselves firmly inside the lab animals’ mouths.

When mice whose cancer had already metastasized got daily infusions of the antibodies, their lymph node metastases shrunk by 80% to 90%. And in 15% to 20% of these mice, the antibodies brought about complete remission.

The new findings suggest that fatty acids — dietary fats that are plentiful in all modern human diets and ubiquitous in Western diets — play an outsize role in promoting cancer’s spread. When mice were fed a high-fat diet and seeded with human cancer cells, they developed more and larger lymph node metastases.

And researchers found one type of fat that encouraged metastasis with particular effectiveness.

The researchers bathed human oral cancer cells in palmitic acid — a type of fat widely added to modern processed food — and injected the treated cells into the tongues of mice. The animals’ original tumors did not change in size. But the size and frequency of lymph node metastases increased markedly. Indeed, 10% of the affected mice saw their cancer spread to the lung, a very rare metastasis for this type of cancer.

The finding that dietary fats and large stores of excess fat contribute to cancer’s spread is not new. University of Chicago cancer researcher Ernst Lengyel and his colleagues discovered in 2011 that dietary fat was a key promoter of metastasis in ovarian cancer.

Lengyel, who wasn’t involved in the new research, called the Nature paper “fantastic.” But he cautioned that it is far too early for cancer patients to halt their consumption of fat in a bid to prevent their disease from spreading.

“You can take away from this paper that cancer cells depend on the nutrients in their environment,” Lengyel said. But, he added, “fatty acids have very important roles for normal cells and also help immune cells to protect the body from the tumor.” So cutting consumption of all fats could be harmful, he said.

The findings are striking, given that 90% of the world’s 7.6 million cancer deaths each year come after a cancer has metastasized. Benitah said his team is working with a London-based medical research charity, MRC Technology, to identify human versions of the mouse antibodies that have shown such promise in blocking cancer’s spread.

The work of identifying those human antibodies, and of beginning to test them in humans, is expected to take up to 10 years, Benitah said. However, with a few lucky breaks, antibodies capable of knocking out CD36 in human cells could be found in just three or four years, he said.

“Science is much tougher than many people might think. We constantly have negative results and failure,” Benitah said. But his lab’s four-year quest to find a way to block the spread of cancer has given him some “magical moments,” he said, and “this is what we’re here for.”